A Tale of of Two Baptisteries, Ravenna

As we celebrate the Baptism of the Lord I thought it would be interesting to see two separate and theologically different expressions of this event from the early years of the Church. 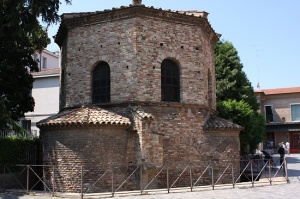 In the 5th century, Ravenna was ruled by Theodoric, a Goth who ascribed to the Arian form of Christianity.

Declared a heresy at the Council of Nicaea in 325, Arianism is the view that Christ, while divine, was created by the Father and is therefore inferior to him. The orthodox view holds that Christ is equally divine (“of the same substance”) as God the Father.

Theodoric built a new Arian cathedral (the Basilica Spirito Santo) with its own baptistery towards the end of the 5th century, not long after Ravenna’s Orthodox Baptistery was built. It is quite similar to its orthodox predecessor, including the mosaic in the dome.

The Byzantines took Ravenna in 540, bringing Arian and barbarian rule in Italy to an end. About 10 years later, Emperor Justinian gave the Arian Baptistery to the orthodox (Catholic) community of the city, who turned it into a church called Santa Maria in Cosmedin. 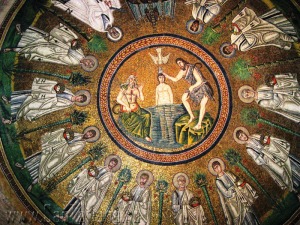 At the center of the dome stands a medallion framed by a golden ring with a laurel
wreath on a red background, inside is depicted, as is fitting in a baptistery,
the scene of the baptism of Christ, a symbol of victory over death.  The episode is traditionally built with three characters.  At the center of the naked
Christ, surrounded by the waters of the Jordan, is presented as young and
beardless, while the Baptist on the left, dressed in a coarse dress of a
shepherd’s crook and a symbol of the hardships of life in the desert, imposes
his hand on the head according to the ancient rite.  From the dove descends divine, to spray with a blast of light, the symbol of the Spirit, the head of Christ (according to
other interpretations, with a stream of holy water, or the bird holding an
olive branch in its beak , alluding to the return of peace after the flood).

To the right there is the figure of a noble and mighty old with white hair and beard, represented with naked torso and the lower part of the body covered with a green cloth.  The character symbolizes the Jordan River, as provided for attributes that are derived directly from the river gods personified common Hellenistic iconography.  In fact, the figure leans against a spilled jar, from whose mouth flows the water, and holding in his hand a reed marsh, while on his head sprouting red claws of a crab, which represent the elements of aquatic life.

Exterior view of the Neoniano Baptistery and campanile from southeast

The Neonian Baptisery (Battistero Neoniano, also known as the Battistero Ortodosso or Orthodox Baptistery) is an octagonal baptistery built in the 5th century. It is the oldest monument in Ravenna and contains some of the city’s most beautiful Byzantine mosaics.

For a thorough theological, historical and liturgical understanding of the Neonian Baptistry I would recommend  Annabel Jane Wharton’s study in the Art Bulletin of September, 1987 with its accompanying bibliography.

The building was finished by Bishop Neone (451-75) in the second half of the 5th century, during which the mosaics were added to the dome. It is from this bishop that the Battistero Neoniano gets its name.

In the center of the baptistery’s cupola is a magnificent mosaic laid out in concentric circles like a great wheel. The central medallion depicts the Baptism of Christ by John the Baptist in the River Jordan. The right arm of John the Baptist, the dove, and Christ’s head are all 18th century restorations. The dish that St. John is using to pour the water was added in the 19th century by a Roman artisan named Felice Kibel, who was charged with restoring the mosaics and went overboard with creative license. 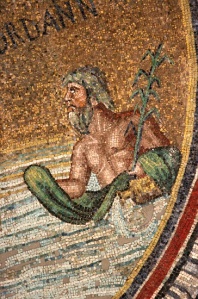 The lower right of the central baptism scene is a personification of the Jordan River as an old man rising from the water, holding a reed in one hand and offering a garment to Christ in the other.

The Mosaics Nearly The Same

In comparing the two center scenes of the Baptism we notice a  difference. In the Arian mosaic Jesus appears as a clean shaven youth, but in the orthodox depiction he is older and sporting a beard. Is there a significant reason for the difference?

The youthful, clean shaven Christ was actually the first to appear in Christian art. The older, bearded Jesus began to appear only in the last part of the 4th century when, in an attempt to win over pagans, Christian artists began to depict Christ as divine as the pagan gods were divine, using pagan iconography that pagan citizens would recognize. The divinity of Jupiter (Zeus) and other supreme ‘father’ gods was usually indicated in pagan art by mature gods, appearing wise with full heads of hair and full beards.

Some art historians, however, argue that the difference between the two images of Christ in the Ravenna mosaics was actually the result of the Christological challenge posed by Arianism. As the Arians believed Christ to be created by the Father and not co-eternal with the Father, he was depicted as young –or “inferior”—in the Arian baptistery mosaic. The Arian structure, remember, was built after the orthodox one and so, perhaps, the Christ in its dome was meant as a challenge to the Christology evident in the orthodox baptistery across town.

Whether that was the case or not the possible difference in meaning might prompt us, on this Feast of the Baptism of the Lord, to consider the words from heaven, “This is my beloved Son…”,4 spoken as Jesus came up out of the water after being baptized by John.

I am a Catholic Priest of the Diocese of Richmond. I am also a presenter in the Theology and Symbolism in Art from the art of the catacombs to modern art. My current research is on the duplicity of art in 19th Century America.
View all posts by Monsignor Mark Richard Lane →
This entry was posted in Arianism, Faith, Jesus, John The Baptist, Mosaics, Symbolism. Bookmark the permalink.
Loading Comments...
Comment
×
%d bloggers like this: